Well friends, I'm happy to announce that Susan Wornick, the well known anchor/reporter from News Channel 5 Boston, will be the special guest speaker at our Project Smile 10th Anniversary Celebration. I'm really happy about that. It was also great that she responded within a few hours of my emailing our invitation. It is wonderful when people are responsive like that. It makes my job a lot easier. Even if you can't participate in an event, I wish that people would simply respond. Susan is really well known and I think she'll do a great job and will be a draw for the event. I'm also really relieved that we now have a speaker. It is one less thing to worry about.

Things are shaping up well for both of our events. It seems like we were on a bit of a rough patch, but it's one of those things that you just have to work through. We now have awesome airline tickets for the silent auctions at both events and the gift certificates are trickling in. I met a potential sponsor last week who is really interested in participating. I'm having a phone call with them tomorrow, so hopefully I should have some good news. I also followed up with another potential sponsor today that we have worked with before on a different event. They can't commit yet, but they are definitely interested.

Today, we did another donation to SMOC, the South Middlesex Opportunity Council, in Framingham. they run a number of homeless shelters throughout the area. We donated over 150 stuffed animals, books and coloring books/crayons. We've been donating to SMOC for a number of years now. Here are 2 photos: 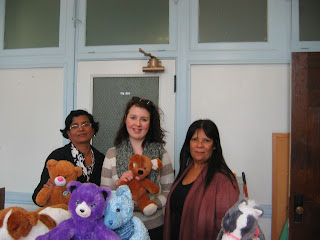 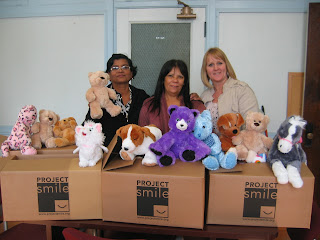 Well, that's the latest for tonight. There was so much that I was going to do tonight, but now I'm getting tired. I'm off to eat my grapefruit- although, I feel like eating the new herb brie cheese that I bought today instead. Ah, the joys of being healthy! Until tomorrow friends...

Have you ever wondered what it is like to run a non profit or any other business? (The similarities between non profits and other for-profit businesses are quite great) My blog is about the daily activities of managing a small, but rapidly growing non profit, an organization which I started and this year will be celebrating its 14th Anniversary. Share the highs, the lows, frustrations, anxieties, challenges and the immense rewards.