Greetings friends! Ah, it has been too long since I last blogged! There has been lots going on, so it's not like I have nothing to write about. So what's new? Well, we've been doing a bunch of donations including DCF last week, Fitchburg PD, The St. Ambrose Family shelter in Dorchester and a Newton homeless shelter for battered women and children called Second Step. I had called my contact at Newton PD to see if they needed more items for children, which they did. The Lt. that I work with suggested that I reach out to this Newton shelter and see if they needed items. They were happy to have an assortment of coloring books/crayons and reading books. I also included some really nice kids puzzles that had been donated to us. We've been getting some awesome donations lately from readers of Women's World magazine. One lady from Florida took the time to write us a handwritten note, asking what items we needed. She said that she read about us in the magazine, but didn't have access to a computer. She said that she would go to the Dollar store and buy items for us and mail them. I hand wrote a Project Smile card back to her, thanking her and letting her know what items we needed. It was so sweet to get her note. Here is a photo from our donation to the Second Step shelter. I'm happy that we were able to add a new shelter to partner with. 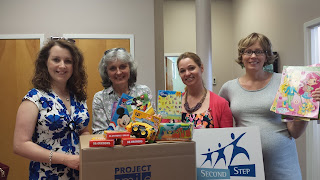 In other news, we already have 5 participants signed up to participate in the Date Auction. We're partnering with one of Boston's biggest nightlife companies, 6one7 Productions. They are helping with recruiting bachelors/ettes and promoting the event. They were a big help last year with recruiting participants. This time we are including them as an official event partner. Ace, one of the owners of the company, posted the recruiting flyer, on FB today and we got some immediate responses.

I've been getting back into going to a lot of networking events lately. I had gotten out of the routine a bit, but now I have a friend who also enjoys going to networking events for her own company, so we've been going together and it has been great. When you make the commitment to someone else that you're going to be attending, it really ensures that you do actually go to the event. It's easy when you're tired at the end of the day and don't feel like making the drive, to blow off attending. It makes such a difference to have a friend going as well.

Well, that's the latest for tonight. I'm off to eat some more watermelon and watch the rest of Game 4 of the NBA Finals- go Cavs! Until next time friends...
Posted by Catherine at 11:19 PM No comments:

Have you ever wondered what it is like to run a non profit or any other business? (The similarities between non profits and other for-profit businesses are quite great) My blog is about the daily activities of managing a small, but rapidly growing non profit, an organization which I started and this year will be celebrating its 17th Anniversary. Share the highs, the lows, frustrations, anxieties, challenges and the immense rewards.