Greetings friends! So what's the latest? Well, things are chugging along well over here. One of our supporters, Melanie Fleet, a Boston area realtor, organized a client appreciation event where she collected donations of new stuffed animals for us. We received over 100 beautiful stuffed animals. It is awesome to have support like that. Below is a photo with Melanie and a photo of some of the stuffed animals. Thank you Melanie and everyone who donated! We included them in our donation last week to Lowell Police. 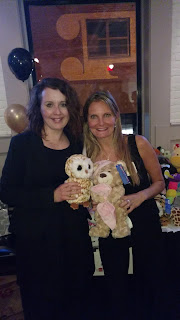 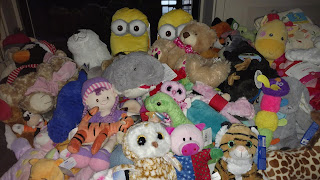 A brother and sister duo, Piper and Parker, also helped recently. They were inspired to start their own charity to help children and collected hundreds of stuffed animals. Their dad reached out to me after the kids decided they wanted to donate to Project Smile. They dropped off 200 beautiful stuffed animals. We included them in our DCF donation last week and some of our other donations. Here is an adorable photo of the children with their collection. No- the massive dog was not donated to us! I don't think that would fit in a cruiser or ambulance! 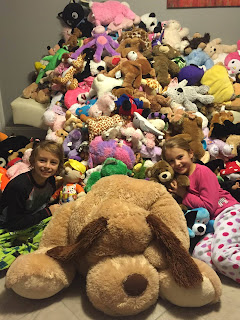 We're always looking for more groups or individuals who would like to help out like this and collect new items for us. So, if you know anyone who might like to help, please spread the word.

We've been adding some new departments recently- Littleton Police, Bolton Police and Bolton Ambulance. I love it when we add new departments. One of the officers who reached out first heard about Project Smile when he was in the police academy and I had gone to his class to talk about our work and recruit participants for our annual Date Auction. It's hard to keep up with all the departments we work with, but it's great when new ones reach out and want to be involved. The Littleton Police sent a press release to their local newspaper and I received a note from a lady with a $30 check as a donation. She read about our efforts in the newspaper and wanted to support what we were doing. I wrote her a card thanking her for the donation.  I have a bunch of Boston area departments that I need to follow up with tomorrow. It has been a while since we donated to some of them, so their supplies must be running low.

Well, that's the latest for tonight. I'm off to eat my grapefruit- hopefully, there is one left in the fridge. Until tomorrow friends...

Greetings friends and happy new year! We're almost half way through January, so maybe I'm a little late on the new years greetings! Anyways, I am excited for the new year. We finished 2015 on a high note with some great donations. It was another good year for us and for that, I am very grateful. Thank you to everyone who supported us last year and through the many years. Every donation made a difference.

I am excited for everything that I want to do this year. One of my goals for Project Smile is to expand our event into other areas. I've started work on bringing Shoe Club events to Providence this spring and hopefully to launch a Project Smile event there. I also want to work on doing a second Date Auction in another area. I think that it is an event that could travel well. It's a matter of finding the right event partners. I reached out to Assembly Row about having our spring fashion show with them again this year. They are interested in working together again for another event. We're going to be speaking later this week. They were great to work with and I would love to have another fashion event with them. I also want to look for more speaking opportunities, whether it is Rotary Clubs or other groups- the more opportunities I have to speak in front of groups of people, the more I can get people involved to support our work. I also want to attend more networking events with different organizations.

We've been getting lots of lovely donations of stuffed animals lately. A woman from a social organization in Warwick stopped by today and dropped off 4 big bags of new teddy bears that they had received for a Christmas program they organized.  Right before Christmas, employees at Converse did a team building event where they stuffed teddy bears. They donated 200 lovely little bears to us. The bears all have hand written tags on them which are so cute. Here are photos from the Converse event 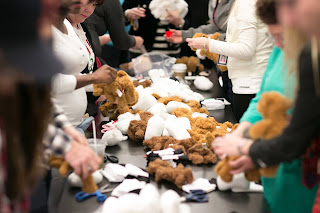 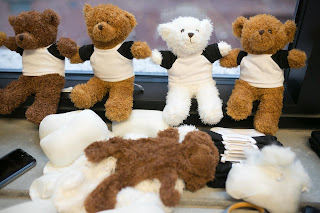 Well, that's all for tonight. I'm off to do some event research. Until next time friends....
Posted by Catherine at 9:57 PM No comments:

Have you ever wondered what it is like to run a non profit or any other business? (The similarities between non profits and other for-profit businesses are quite great) My blog is about the daily activities of managing a small, but rapidly growing non profit, an organization which I started and this year will be celebrating its 17th Anniversary. Share the highs, the lows, frustrations, anxieties, challenges and the immense rewards.